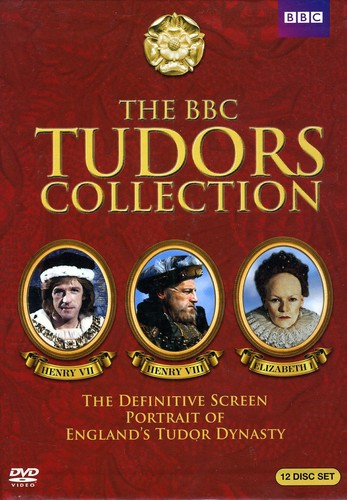 THE BBC TUDORS COLLECTION combines the three most highly-praised, historically authentic mini-series ever produced about the great Tudor monarchs in one collectible set. From the heyday of BBC drama, these three tour-de-force dramas are meticulously researched and brilliantly acted, together winning 6 Emmy awards and 8 BAFTA's (Britain's equivalent of the Emmys). in THE SHADOW OF THE TOWER, James Maxwell (THE PORTRAIT OF a LADY) plays Henry VII, the first of the Tudor monarchs, who took over the throne after Richard III was killed at the Battle of Bosworth Field in 1485. Keith Michell (Murder She Wrote) received an Emmy and a BAFTA for his masterful portrayal of England's infamously fickle king in THE SIX WIVES OF HENRY VIII. And double-Oscar winner Glenda Jackson (A TOUCH OF CLASS, WOMEN IN LOVE) turns in one of the most remarkable performances in television history, transforming herself into England's Virgin Queen in ELIZABETH R, winning two Emmys and a BAFTA. All 25 episodes of these three breathtaking dramas are included in this 12-disc collection, the definitive screen portrait of England's Tudor dynasty.
This website uses cookies to personalize content and analyse traffic in order to offer you a better experience.
I accept Learn More
back to top