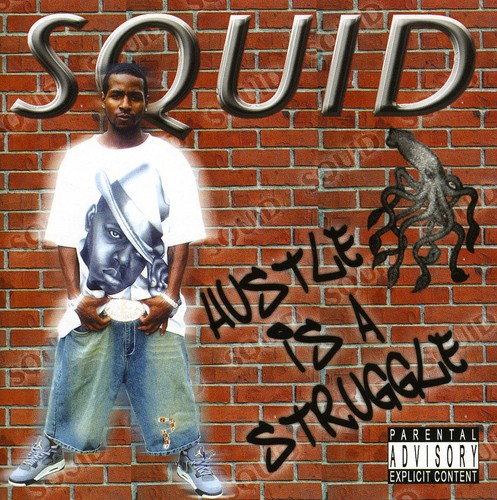 Hustle Is a Struggle
Artist: Squid
Format: CD
New: Not in stock
Wish

Squid Artist Bio Wake up! The city of Albion, MI is buzzing with the sound of a gifted rapper named Squid. This recording artist is representing his hood to the fullest because he feels that his city is nothing to be slept on. So wake up, because Squid plans to school the world about how things go down in his neck of the woods. Squid (Lloyd Williams) has had a love for music all his life. At an early age, his mother exposed him to a variety of old school R&B and blues music. Like a sponge, he absorbed the sound, but kept his ideas tucked away in his head until he was ready to do his own thing. At around 13 years old, Squid had his first stage performance in a local talent show. The experience was so exhilarating that it made him want to become an entertainer. He listened to the lyrics of artists like Run DMC, Tupac, and Biggie, and he began writing his own lyrics. Since then, Squid's lyrical skills have grown tremendously. His style is a reflection of reality, delivered with heart and soul. Squid is quick to point out that his music is 'true hip-hop', and he feels he has something that both young and old hip-hop heads can appreciate. In his own words, 'I'm confident in my skills, yet I remain humble because I know that my success lies in God's hands'. His goal is to make music that last through generations like the music of Stevie Wonder, Michael Jackson, R. Kelly, and many of the legendary Motown pioneers. Squid was fortunate to cross paths with Reggie Robinson, the owner of First Place Records. Reggie believed in Squid's music and decided to sign him to a record deal. After extensive work in the studio, Squid finished his debut album entitled 'Hustle Is A Struggle' (July 2005). The title speaks for itself. It is a masterpiece of cutting edge hip-hop music with powerful lyrical deliveries. This CD is already making noise is streets. The title cut, 'Hustle Is A Struggle' was being played on the radio at Power 96.5 FM in Lansing five months before the album even dropped. Another hot track entitled 'Say It Now' was number one for two weeks in a row in 96.5's 'Battle of the Beats' segment. In addition to getting radio play, Squid has performed at several venues in the south-central Michigan area, including appearances at Club 121 in Albion (Thanksgiving 2004), Roxies in Hillsdale (New Years 2005), and most recently at Club Rocket in Jackson (his record release party). Squid is open to a major label deal, however he is more concerned with helping First Place Records reach major label status. He considers Reggie Robinson to be a mentor, and he is thankful for the opportunity he has been given to express himself musically. First Place Records is currently looking for investors and a possible distribution deal to share Squid's hot new project with the country. Squid's small town point-of-view brings a whole new dimension to hip-hop music, and that alone makes his music worthy of being heard. 'Hustle Is A Struggle' has shown strong potential through the radio play and live performances, and Squid's fan base is growing daily. Now, it's time for the country to hear what it's been missing. So, wake up America! Wake up! The new Squid CD has arrived. Distributed by First Place Records, LLC * P.O. Box 21101 Lansing, MI 48909 For bookings & inquiries call Kerry Petty of RFR Management: (517) 202-6062.