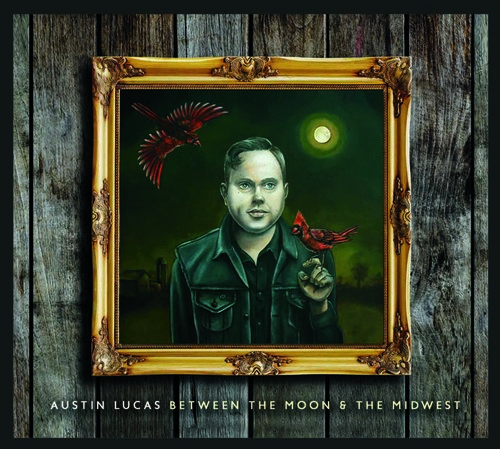 Between The Moon & The Midwest
Artist: Austin Lucas
Format: CD
New: Not in stock
Wish

No one ever said country music had to be simple, and when Austin Lucas began thinking about the follow-up to his critically acclaimed 2013 album Stay Reckless he had a lot on his mind. The Indiana troubadour wanted to do something not only different from his own work, but unlike anything else being done in the realm of country music and Americana. Between The Moon And The Midwest marries traditional & cosmic country sounds with sharp, vivid storytelling in a fully realized album concept. - Citing influences like Buck Owens and George Jones, Lucas had wanted to record a fully country album since 2011's A New Home In The Old World. Enlisting the help of Joey Kneiser - guitarist and vocalist of the Tennessee band Glossary- they crafted a sound that, while rooted in outlaw and hard country, was infused with 60s psychedelic pop like the Zombies and the Beach Boys circa Pet Sounds. The result is a finely produced sound layered with guitar, vocal harmonies and atmospheric harmonics. Between The Moon And The Midwest is unique in it's mix of sounds, songwriting, and influences. - From the country-gold sound of "Unbroken Hearts", the infectious "Ain't We Free", to the plaintive truths in "Wrong Side of the Dream" and "The Flame", he delivers an album at once timeless and modern. Boosted by guest appearances from John Moreland, Lydia Loveless, and Cory Branan, Between The Moon And The Midwest finds Lucas at the top of his game and taking his music into exciting new territory.