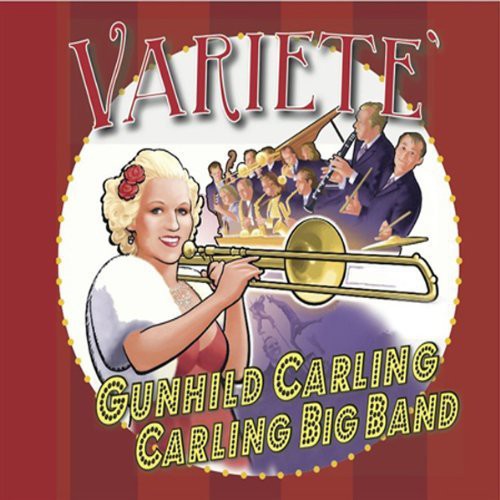 Carling Big Band with Gunhild herself in the forefront is the band that hit knockout on the entire world of music, dancers and audience. There is no band in the whole world that this original orchestra where all the musicians play multiple instruments composes dances and plays to the crowd roar. The album variety show is a collection of Gunhild Carling Big Band's acclaimed show of the same name from the summer (2013) live performances. This collection is also called the 'Royal Edition' where all the songs from the album were performed in the Swedish king's palace in September-13, when the king was celebrating 40 years as a regent. This winter Gunhild appears in Christer SjĂ¶grens Christmas Tour 2013 and in early 2014, it's time for the tour with Variety show with Carling Big Band again. QUOTES ABOUT THE SHOW AND GUNHILD CARLING FROM THE PRESS "At the center of this multi-faceted and sometimes circus -like jazz show are the charismatic and multitalented Gunhild Carling. Her ability to articulate musical perfect score on just about any instrument is rather sensational. Although it did Gunhild Carling vocal onslaught splendidly, mainly unmistakable Billie Holiday influence in "You are my only universe" and their own bittersweet song "Open love letter"." Mattias Carlsson - Orkesterjournalen 'Rafting, surprising and diverse' Sydsvenskan 'True Fucking Jazz, straight out!' Ulf Johansson Werre, Trombonist 'Thanks to Gunhild Carling Big Band got the evening dynamics and climax." Helsingborgs Dagblad 'A better recipe for recession and sad faces than Carling and her gang, I can not actually imagine.' SmĂĄlandsposten 'Music joy is contagious' Lira Music Magazine 'Jazz at it's best' SmĂĄlandstidningen ' Crowded when jazz came to Ă–land' Barometern.
back to top