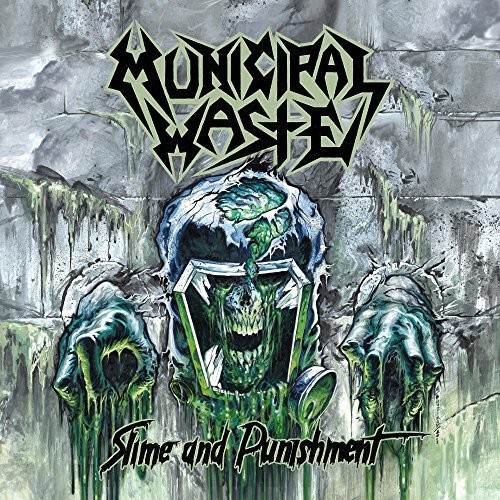 Vinyl LP pressing. Equipped with a crushing sound that will implode both your soul and skull, speed metal masters and Richmond Virginia locals Municipal Waste barrel back onto the scene with Slime And Punishment! Their long awaited return has breathed a new life into this modern speed metal crossover project that was initially birthed in 2000. Being their sixth release, and their second on Nuclear Blast Records, it is no surprise the level of artistic freedom and creativity that was seamlessly pushed into this album. As Municipal Waste had been touring, traveling, and spending constant time on the road, it ended in them really wanting to take their time developing Slime And Punishment as well as preparing for it's release. The recording process was also different this time. With bassist Phil Hall studying the fine art of musical engineering, the band was able to record the album themselves before sending it off to Bill Metoyer (known for his work with the thrasher classics like SLAYER, W.A.S.P., Lizzy Borden and Dark Angel) in Hollywood, CA to be professionally mixed. Messages carried in the songs upon this release are simple but brutal, hilariously violent, and direct- as always; die-hard fans will not be disappointed. With more insane and violently colorful artwork by illustrator Andrei Bouzikov (also responsible for the art of Massive Aggressive and The Art Of Partying), adorning the cover of Slime And Punishment, the album holds strong to Municipal Waste's visual style as well.