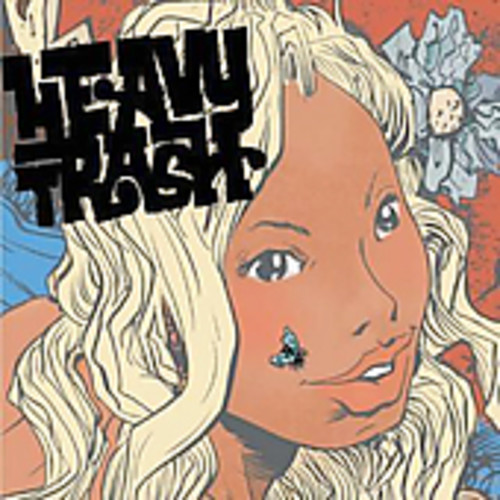 Jon Spencer and Matt Verta-Ray are Heavy Trash. This is a secret place where even the best-intentioned rockabilly explorations are scarred by dirty guitars, bad dreams, and lust one wrong. On their self-titled debt HEAVY TRASH create the perfect soundtrack for boozy all-night throw downs pettin' parties and psychedelic fright shows.

Rockabilly is so hopelessly retro that it's hard not to think of it in any other context than a twist contest at Jackrabbit Slim's-or Richie, Potsie, Ralphie and the Fonz trolling for bobby-socked high-school "kitty-cats" at the local drive-in. Even the dudes who play rockabilly insist on having stiff, greasy pompadours, butterfly collars, and vintage suits. (You can spot the Stray Cats disciples by the addition of full-sleeve Sailor Jerry tattoos.) The music is always some hastily delivered amalgamation of Elvis, Chuck Berry, and Bill Haley and His Comets, with maybe some Roy Orbison and Statler Brothers thrown in just to keep it from becoming patently unlistenable. And yet Jon Spencer (Jon Spencer Blues Explosion, ex-Pussy Galore) and Matt Verta-Ray (Speedball Baby, ex-Madder Rose) have somehow managed to transcend the usual rockabilly ribbon-mic hand-jive on Heavy Trash's self-titled debut. Maybe it's the American Manga-style album art courtesy of Paul Pope; maybe it's the fact that they have a song about Gatorade. Oh, they've got the rock-hard quiffs, the pimp suits, the upright bass, the hollow-body guitars, the affected vocal twang-and yeah, it's like listening to a hi-fidelity version of an old Sun Studios session. But for just a second, they actually trick you into thinking the '50s might've been tolerable. Which is certainly more than you can say for Bill Haley.