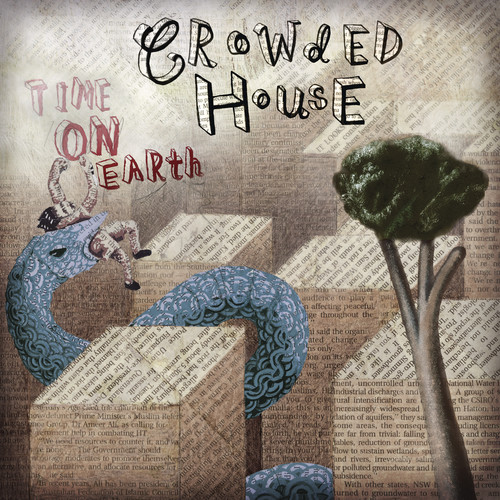 Vinyl LP pressing. Time on Earth is the fifth studio album by the pop-rock band Crowded House. Tracks were produced by both Ethan Johns and Steve Lillywhite and the album was released in June 2007. Time on Earth is the band's first studio album since 1993, and marks the reunion of the band eleven years after they disbanded and features new drummer Matt Sherrod in place of the original drummer, Paul Hester, who took his own life in 2005. The album was originally intended to be frontman Neil Finn's third solo release. In the wake of Paul Hester's death, as well as preparations for the release of the live album Farewell to the World, the band members were drawn together and their friendship was reinvigorated. In 2006, Neil Finn invited bassist Nick Seymour to participate in the recording of his new album and subsequent tour. After recording a complete album with Ethan Johns in the producer and drummer's seat and Seymour contributing substantially throughout the process, Finn decided Crowded House would reform and that Time on Earth would be the band's fifth studio album. The title Time on Earth takes it's name from a song of the same name that was not included in the album. With new drummer Matt Sherrod and returning multi-instrumentalist Mark Hart now involved as members of the official line-up, the band returned to the studio to record four additional tracks with producer Steve Lillywhite. Hart and Sherrod also contributed retroactively to some of the material produced by Ethan Johns.