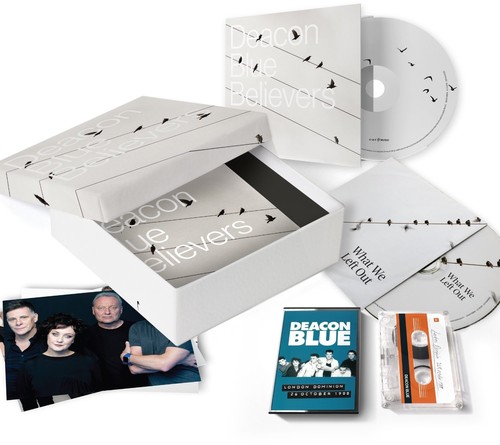 Deluxe box set containing CD, cassette (unreleased recording of "Live at the dominion Theatre, London 1988"), digital download of London concert recording including unreleased track "You Don't Understand", bonus CD (What We Left Out - 27 tracks of demos and work tape tracks + four unreleased tracks), postcard bundle and art print of cover. 2016 release, the eighth studio album from the veteran Scottish band. Deacon Blue has sold six million albums worldwide. Believers was produced by indie producer Paul Savage at Chem 19 studios in Blantyre. Deacon Blue advance their vast creative and commercial renaissance with the release of Believers. Believers is the third part of a trilogy that began with The Hipsters in 2012 and continued with A New House in 2014. As such it continues a songwriting trajectory that is all rich, idiosyncratic and sharply honed at once- and inevitably colored by a sense of urgency to make sense of recent events, both personal and global.