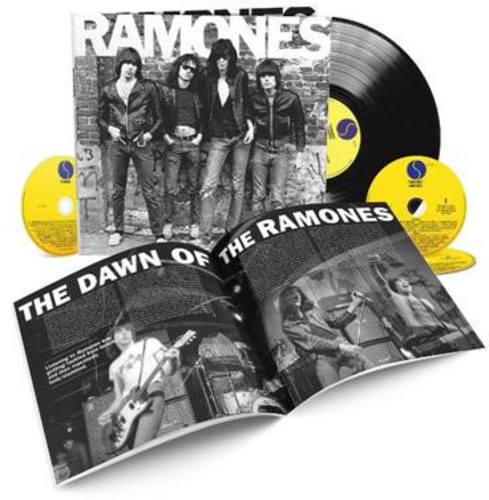 This year marks the 40th anniversary of Ramones, recently named the "Greatest Punk Album Of All Time" by Rolling Stone, and certainly one of the most important and influential albums of all time. This masterpiece helped launch the punk rock scenes in both America and Britain, and went on to inspire countless other artists for generations to come.

To celebrate the Ramones' lasting impact, Rhino will release the ultimate tribute to the band's landmark debut, packaged in a 12" x 12" hardcover book. The 3CD/1LP set is a limited edition of 19,760 individually numbered copies and includes a sonically superior remastered stereo version and a meticulously recreated mono mix of the original album, plus rarities, unheard demos, and an unreleased live show - all produced, mixed, and mastered by the album's original producer and mixer Craig Leon.

In addition to the music, the set also features extensive production notes about the recording of the original album by Leon, an essay looking back on the band's early days by rock journalist Mitchell Cohen, along with additional pictures taken by Roberta Bayley, whose iconic photo of the band graces the album's cover.

Here's why this is the ULTIMATE collector's piece:

- Features a brand NEW MONO MIX of the album - the band had originally discussed recording the album in mono, but it was ultimately decided against. "I'm thrilled that now, 40 years later, we followed through on that original idea. - Craig Leon
- Includes a PREVIOUSLY UNRELEASED 1976 SHOW from the Roxy, Hollywood
- Remastered stereo album
- Produced and remastered by the album's original producer Craig Leon
- Features PREVIOUSLY UNSEEN PHOTOS by Roberta Bayley - the album's original photographer