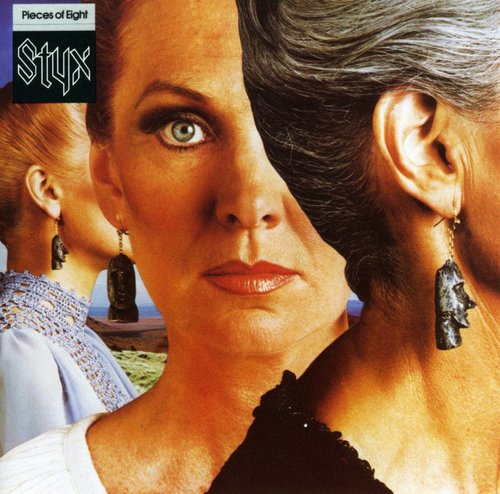 Styx reached #6 with this 1978 LP, their perfect blend of prog power and pop. Includes the hits Blue Collar Man; Renegade, and Sing for a Day plus Queen of Spades ; the hypnotic Tommy Shaw-penned album closer Aku-Aku, and more!

The album was the band's follow-up to their Triple Platinum selling ''The Grand Illusion'' album.

The theme of the album, as Dennis DeYoung explained on ''In the Studio with Redbeard'' which devoted an entire episode to Pieces of Eight, was about "not giving up your dreams just for the pursuit of money and material possessions".

Eight of the album's ten tracks have vocals, and it features two instrumentals, the DeYoung synthesizer showcase "The Message" and Tommy Shaw's closing "Aku-Aku" (although for the latter, there was one lyric spoken, the title of the song).

The album's cover was done by Hipgnosis. DeYoung stated in the same 1991 interview with Redbeard on the "In the Studio" episode that he initially hated the cover but grew to like it as he got older.

The album peaked at #6 on the Billboard album chart, and like its predecessor would go Triple Platinum. - Wikipedia