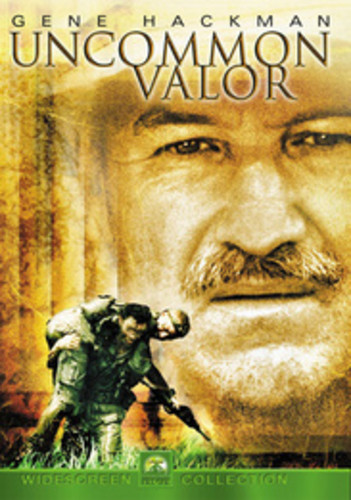 Gene Hackman portrays Colonel Jason Rhodes, a man obsessed, in this powerful, action-packed adventure. For over ten years, Rhodes has been living a nightmare searching for his son who is listed as "missing in action" in Vietnam. After useless appeals to the government for action, Rhodes takes matters into his own hands. With the financial backing of a Texas oil tycoon (Robert Stack) and the help of his son's five marine buddies, Rhodes prepares to carry out a daring mission. After weeks of grueling traning, the courageous veterans leave for Laos. The final battle of the Vietnam conflict is about to begin. (English), Ted Kotcheff continues his First Blood fervor with Uncommon Valor. Gene Hackman stars as Cal Rhodes, a former Marine Colonel who has been getting the run-around for ten years from the government concerning the disappearance of his son and his buddies - all Marines who enlisted years prior and served in Vietnam. Rhodes' son was last seen in Laos, where he was fighting in the war and captured as a POW. When word gets back to Rhodes that the men may still be alive and held in prison camps, but the government still has the men listed as missing in action, Rhodes decides to take matters into his own hands. Contacting an old friend, oil baron MacGregor (Robert Stack), Rhodes is granted financial backing to form his own incursion force. He assembles a crack team of men, puts them through an intensive period of training. And heads back with them into the Laotian jungles to search for the MIAs. (Spanish)